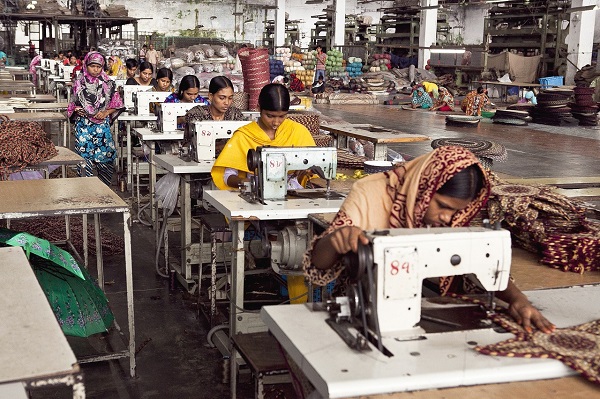 When chips are down due to pandemic and constant floods in Bangladesh, many global multi-million fashion brands are still pulling in their wealth from impoverished suppliers in a subtle form of 21st-century neo-colonialism. Many Bangladeshi factories selling to over 24 of the largest global retailers from the UK and Europe are running at a loss as these big retailers are paying below the cost of apparel production by sticking to pre-pandemic prices and simply ignoring the cost of raw materials increasing.

While Bangladesh remains the second largest garments exporter in the world, the country’s garment workers are struggling to survive and local manufacturers are finding it difficult to pay minimum wages while the global sourcing fashion brands turn a blind eye while increasing their profits. Inflation rates soaring around the world have further increased this dismal economic situation.

According to a survey carried out by the University of Aberdeen and trade justice charity Transform Trade titled ’Impact of Global Clothing Retailers - Unfair Practices on Bangladeshi Suppliers During COVID-19’, a lot of malpractices of a large number of high street fashion brands have come to light. More than 50 per cent apparel suppliers have suffered unfair purchasing practices, including cancellations of orders, failure to pay up, payment delays, and discount demands with further effects including forced overtime and harassment.

The bigger brands buying from many factories were the bigger culprits in unfair purchasing practices more than the smaller brands. Suppliers feel any brand that purchases from 15 or more factories were more likely to be engaging in these practices. This converts around a total of 90 per cent of larger high-street brands buying from four or more factories engaging in unfair purchasing practices in the post-lockdown period. With garment factories employing 75 per cent of their previous workers, the study estimates around 900,000 workers could have lost their jobs and are struggling in their daily lives.

An International Trade Centre (ITC) report reiterates the fact that international buyers are consistently paying lower than the global average price to apparel suppliers in Bangladesh but higher to some of the country's competitors. The ITC study analyzed data for 10 of Bangladesh's most important export items for 2020, comparing their FOB prices with those of their 10 biggest competitors for each product. For each case study, the supplying countries such as Bangladesh, Pakistan, and Cambodia are consistently paid lower than the world average prices while others such as Vietnam, Indonesia, Turkey and Mexico are given higher than the average rates. The study feels that customers -- retailers and brands -- should pay their suppliers a fair free-on-board (FOB) price since they are often paying prices that are below the factory costs.

“The data is clear and many factories have been forced to close because of the lower FOB prices. The conclusion is that the fault lies with the customers and therefore, they should be forced to pay a higher FOB price. They are willing to pay higher prices to some countries but rather less to supplying countries that are unable to meet their needs,”says ITC.

For the same products, such as men's woven cotton trousers made in Bangladesh being sold for $7.01 per piece in 2020, which was 9.20 per cent below the global average of $7.72, a country like Vietnam received $10.76 per piece while Sri Lankan and Indian exporters got $8 and $8.41, respectively. This was the same in other apparel also such as men's cotton jeans, women’s bras and woven cotton jackets among others. Only two products such as women's cotton trousers and men's cotton T-shirts manufactured in Bangladesh got a price that was slightly higher than the global average.

Bangladesh needs to diversify its product basket with 80 per cent garment items still confined to five cotton-made items leading to over-capacity. An all-inclusive and accurate costing and valuing is the primary step to moving up the value chain. The small and medium-sized garment manufacturers remain backward and focused on simple cut and sewing operations and it is time that going hi-tech and a versatile portfolio paves the way forward.