Data from Bangladesh’s Export Promotion Bureau (EPB) shows, export earnings from the readymade garments (RMG) sector fell by 6.21 per cent to $16.02 billion during the July-December period of the 2019–20 fiscal following lower shipments of apparel items. Earnings totaled $16.08 billion in the corresponding period of the last fiscal year (2018–19).

The fall in RMG exports was due to instability in international markets and the economic recession in Europe and North America. US-China trade tensions, continuous fluctuations in world’s stock markets, devaluation of the taka against the US dollar and a rise in production costs against low prices offered by foreign buyers have caused the drop in exports.

According to AM Chowdhury Selim, Vice-President, Bangladesh Garments Manufacturers and Exporters Association (BGMEA), international economic recession and rise in the prices of utilities, gas and electricity are responsible for lower production. These have further eroded the association’s competitiveness in the international markets. As a result, the prices in international markets have dropped and export earnings show negative growth. The revised pay structure for the garments sector is also responsible. 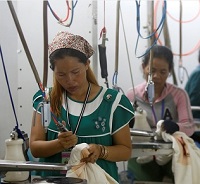