US firms seeking foothold in Vietnam as TPP takes effect

"Vietnam could become even more appealing to US through the Trans-Pacific Partnership, an expansive 12-nation trade deal that would phase out steep import tariffs on Vietnamese-made goods, but only if Congress puts its stamp on it. In campaign season that has ¬renewed public anxiety about US job losses to China, one Michigan shoe company stands as a stark example of how the economic -dynamics are changing quickly in Asia."

Vietnam could become even more appealing to US through the Trans-Pacific Partnership, an expansive 12-nation trade deal that would phase out steep import tariffs on Vietnamese-made goods, but only if Congress puts its stamp on it. In campaign season that has ¬renewed public anxiety about US job losses to China, one Michigan shoe company stands as a stark example of how the economic -dynamics are changing quickly in Asia.

Wolverine Worldwide exemplifies a sharp shift among American footwear and garment producers away from China toward an emerging manufacturing hot spot: Vietnam. During the past three years, the Rockford, Michigan-based maker of brands such as Keds, Hush Puppies and Saucony, has more than doubled its production in the Southeast Asian nation, taking advantage of the lower labour costs there. Vietnam now constituted nearly 30 per cent of Wolverine’s output, while China’s share had fallen from 90 per cent to 50 per cent, company officials said. 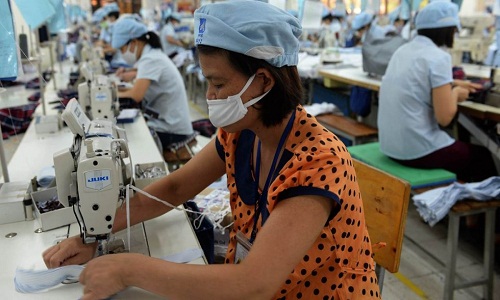 Many other US firms have made a similar move, brightening the economic fortunes of Vietnam. The communist country will become even more appealing to US capitalists through the Trans-Pacific Partnership (TPP) if Obama has his way, an expansive 12-nation trade deal that would phase out steep import tariffs on Vietnamese-made goods.

The US president has touted the pact as a vehicle to help embed the United States in fast-emerging markets in Southeast Asia and exploit global economic trends to America’s benefit. Attempting its own economic transformation toward the service sector, China is pursuing a separate trade pact that includes Vietnam and other Southeast Asian nations. Congress has yet to ratify the accord, and lawmakers have been wary amid the anti-trade sentiment on the campaign trail.

A trade agreement that includes Vietnam, and that does not adequately protect domestic footwear manufacturers, will only accelerate this trend. For companies such as Wolverine, the deal could make an already lucrative business decision even more profitable. Said company officials said that eliminating an estimated $20 million in annual tariffs on Vietnamese-made products would reduce the cost of shoes for American consumers and boost sales. Furthermore, the officials said, declines in the company’s domestic manufacturing workforce had been offset by hiring in other departments.

Under the trade deal, US footwear tariffs, which can be as high as 40 per cent, would be phased out over seven years in Vietnam. That would give Vietnam an advantage over China, Cambodia, Indonesia and the Philippines, which are not TPP members, and accelerate a manufacturing boom inside the country that is already under way.

From 2013 to 2015, US footwear imports from Vietnam rose by almost 50 per cent, growing from US$2.9 billion in 2013 to US$4.3 billion in 2015, according to an analysis by the US International Trade Commission. The study found that shoe company imports to the US would rise by another 23 per cent among TPP countries, mostly from Vietnam, over 15 years.

Matt Priest, president of the Footwear Distributors and Retailers of America, estimated that US companies in Vietnam stand to save $500 million in footwear import taxes under the trade pact. Incidentally, critics said the deal would deliver another blow to an industry that had been decimated in the United States. Former Democratic congressman Michael Michaud said in a letter to the Obama administration in 2011 that domestic footwear production fell by 75 per cent between 1999 and 2007 and that 28,000 US jobs were lost.

But Obama has received support from the industry’s heaviest hitters. Last May, he visited Nike’s headquarters in Beaverton, Oregon, to highlight a pledge from Nike to create 10,000 new domestic jobs in advanced manufacturing if the TPP accord is approved by Congress. That figure is dwarfed by Nike’s workforce in Vietnam, its largest manufacturing base. Obama emphasised that the TPP would require Vietnam to raise working standards, set a minimum wage and allow workers to form labor unions.

Surprisingly, Obama’s message also has not gone over well with one of Nike’s competitors, New Balance, which employs 1,400 manufacturing workers in the Northeast United States – the largest domestic workforce of any athletic shoe maker. This spring, New Balance formally announced its opposition to the TPP, citing broken promises from the Obama administration.

Matt LeBretton, a company spokesman, said the administration had agreed to set up meetings between New Balance and the Pentagon. The company has been lobbying the Defence Department to expand a congressional requirement that mandates military boots and dress shoes be made entirely in the United States to also cover athletic shoes.

Obama administration officials said they tried to work with New Balance, providing longer tariff phaseouts than are required in other parts of the deal, and they noted that the company also makes most of its shoes in China and Vietnam. Still, Nike, with a far larger Vietnamese operation, stands to gain more from the trade deal.