US apparel consumption shrinks by 50 per cent: AAFA 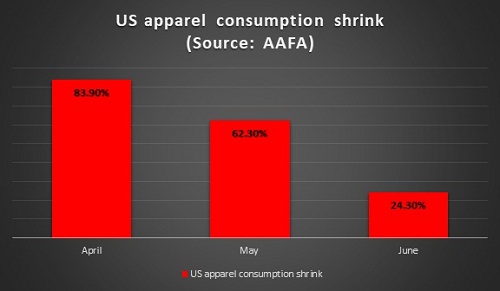 Consumption of apparels in one of the biggest consumer market – the US -- has shrunk by 50 per cent. Nate Herman, Senior Vice-President –Policy, American Apparel & Footwear Association (AAFA) informs, retail sales declined 83.9 per cent in April, 62.3 per cent in May and 24.3 per cent in June. Fashion consumption is headed for a 50 per cent decline to around $200bn, except trade recovers sharply during the coming winter and Christmas holidays.

US’ worsening relationship with China is hitting American apparel brands and retailers as they import the majority of their readymade garments (RMG) from China. AAFA executives say China has failed to ramp up purchases of US cotton and textiles to roughly $1billion a year from to $600 million before the January deal. Other hot-points like intellectual property (IP) theft are distancing the two countries greatly. Many Chinese companies have been able to register a trademark that is a near copy of a US rival brand and have been continuously doing over the previous six months, in spite of Beijing’s pledges that it would stop these activities.

The recent development of sanctions against China’s Xianjing Production and Construction Corporation (XPCC) over serious right abuses in the Xinjiang Uyghur Autonomous Region (XUAR) by the US Department of Treasury’s Office of Foreign Assets Control (OFAC) has boosted claims of rights abuses against the Uyghur ethnic communities by China’s apparel industry.

There are rising calls for limiting import of apparels that include cotton and yarn from Xianjing, adds Herman, noting that this could dent apparel makers’ capability to make cheap goods.