Growing awareness about maintaining personal and environmental hygiene has pushed up demand for home textiles in India. As an ICRA report ‘Indian home textile exporters sew a success story on pandemic-induced lifestyle changes; to clock 20-25 per cent growth with healthy margins in FY2022,’ reveals demand momentum is likely to sustain through Q2-Q4 FY2022, continuing with the trend of past three quarters. The Indian Independent Investment and Credit Ratings Agency, ICRA surveyed four large listed companies with 35-40 per cent share in the India’s home textile exports for this study.

“After adjusting the base for this decline, the exports of these home textile manufacturers grew 15-20 per cent during the nine-month period ended March 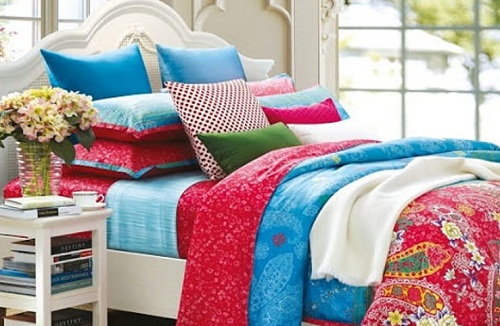 2021. Sales averaged 25-40 per cent higher than the three-year average for the pre-COVID period,” elaborates Pavethra Ponniah, Senior Vice President & Co-Group Head, Corporate Sector Ratings, ICRA. The home textile sector reverted to Y-o-Y growth from Q2 FY2021and grew in double digits for the remaining three quarters. Most demand was driven by the US which accounted for 60 per cent of India’s home textile exports.

During these three quarters, India’s exports to the US, increased 14 per cent against a growth of 9 per cent in FY2021. India benefitted from a robust distribution model including large departmental chains that remained open even during the lockdown. India’s exports to other major markets including UK and the EU however, reported a Y-o-Y decline during the year.

The ICRA reports shows, India’s home textile exporters have a robust order book for the year. They are likely to outsource some of these orders to fulfil their commitments in time. Their operating margins improved in FY2021 on account of the lower raw material and production costs. Their growth is likely to sustain in FY2022 with sales turnover and operating costs remaining healthy. The 50 per cent rise in cotton yarn prices will not affect their profitability as operating efficiencies and re-negotiation of product prices are likely to boost growth.

Unlike operating margins, the profit margins of these four companies dipped in Q4 FY2021. Lack of clarity on new export incentive scheme prevented them from factoring in the export incentive benefits. They started recognizing these export incentives only from Q1 FY2022 as the government’s continued the Rebate of State and Central Taxes and Levies (RoSCTL) scheme on exports of apparels and made-ups till March 31, 2024. This scheme helped companies boost operating margins by 500-600 bps to 21.9 per cent on a sequential basis in Q1 FY2022. Operating margins remained healthy at 17.6 per cent, though lower than the previous quarter due to the impact of higher raw material prices.