"At a glittering function of The Synthetic & Rayon Textiles Export Promotion Council (SRTEPC), held on February 08, 2020 in Mumbai, Smriti Zubin Irani, Union Minister of Women & Child Development and Textiles awarded exporters of synthetic textiles for their outstanding export performance for the year 2018-19." 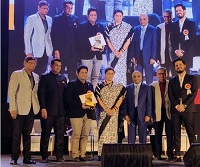 At a glittering function of The Synthetic & Rayon Textiles Export Promotion Council (SRTEPC), held on February 08, 2020 in Mumbai, Smriti Zubin Irani, Union Minister of Women & Child Development and Textiles awarded exporters of synthetic textiles for their outstanding export performance for the year 2018-19.

The Hon'ble Union Minister of Women & Child Development and Textiles, Smriti Zubin Irani said that despite 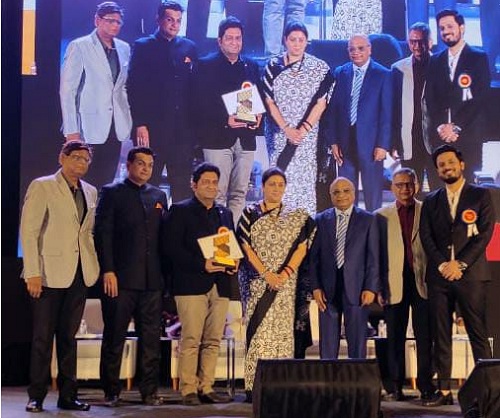 global slowdown and other insurmountable difficulties faced by the textile industry, exports of MMF textiles during 2018-19 was to the tune of US$6.13 billion. Lauding the efforts of the exporters, she said that this was possible due to the concerted efforts of the Council and its member exporters. She also informed that the Council has vision of achieving US$ 7 billion by the end of financial year 2020-21. She remarked that the recognition of the outstanding performance by exporters will motivate the industry to excel in the coming year and spur them to imbibe international best practices.

In his speech, the SRTEPC Chairman Ronak Rughani mentioned about the milestone announcement by the Government made in the recent Budget 2020-21 for setting up of the National Technical Textiles Mission with a four-year implementation period fram 2020-21 to 2023-24 at an estimated outlay of Rs. 1,480 crore. He said that this will be a great lease of life for the MMF textile segment because more than 90 per cent of fibers used in the Technical Textiles segment come from Manmade fibers.

The SRTEPC Chairman said that it’s Council's tradition to recognise the untiring efforts made by our members in export front and celebrate together the outstanding achievements and enterprising skills.

Anil Rajvanshi, Convener of the Export Award Committee and former Chairman, SRTEPC said that the export award function is not just an event but a celebration of the hard work put in by the award winning companies.

Union Minister of Women & Child Development and Textiles released a study report by Gherzi Textil Organisation AG, Zurich on "Promoțing Growth of Man-made Fiber Textile Industry in India - A Roadmap to identify gaps and suggest measures". This report would help in addressing the issues pertaining to both production and export of man-made fiber textiles