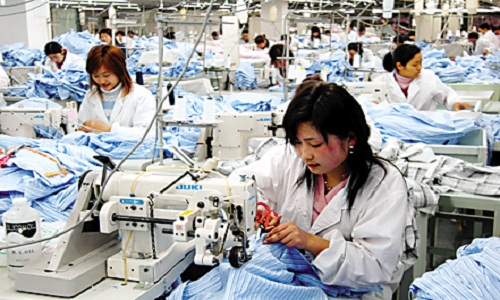 COVID-19 forced Indian textile industry to transfer a large number of textile orders to Chinese factories for production. For example, all orders received by 100 New Delhi factories were transferred to China. To fulfill these orders, Chinese factories are opening new production lines and expanding their staff.

Alibaba international station figures reveal, since May, China recorded 100 per cent increase in fabrics and textile raw material orders. It also witnessed 200 per cent increase in apparel orders. In the first three quarters of this fiscal, China’s total import and export volume increased 0.7 per cent to reach 23.12 trillion yuan with Indian textile orders playing a significant role in this.

The Indian textile and clothing industry is worth $ 250 billion. It is also one of the largest sources of forex

income and accounts for about 15 per cent of India's total export revenue. From 2000-2018, the industry attracted FDI worth $2.97 billion. However, the pandemic stalled India’s progress and many of factories could not start work as scheduled. As a result, many orders were transferred to China which not only has a high degree of industrial automation but also could complete these orders in shortest possible time.

The Chinese textile and clothing industry has been growing well since May. Exports have been increasing with volume of textiles from the General Administration of Customs increasing by 3.29 per cent to 215.8 per cent in the first half of this year. From January to September, China's textile exports reached $117.95 billion and the export growth rate increased by 5.9 percentage points compared with the first half of the year. According to the General Administration of Customs, since the second half of the year, China’s clothing exports too have improved. The volume of its clothing exports increased 6.5 per cent in September to $15.23 billion.

In general, the Southeast Asian textile and apparel industry is benefiting from the Christmas season in the West. Some factory owners in the region have received orders from European and American countries.

The Indian textile and apparel industry is also benefitting with high orders. The industry offers several advantages with labor cost, energy cost, land cost, government tax, tariff and environmental protection. The gross profit margin of local textile and garment enterprises in Southeast Asia is 5 per cent higher than that of domestic enterprises. Hence, a lot of orders from this region are likely to return to India and Southeast Asia once the outbreak is over. As demand from Europe and the US has not yet recovered, domestic Chinese enterprises need to balance their short-term interests and long-term strategies.

At present, the demand for medium and low-end textile products is low-end in China. Designers in the country favor new elastic fabrics like T400 and T800. Sun Ruizhe, President, China Textile Industry Federation, has advised domestic fabric enterprises to foray into the middle and high-end fabric markets.

The increasing proportion of cross-border e-commerce exports is helping China stabilize its foreign trade. The country is also benefitting from its local fashion e-commerce users. To explore these benefits, Chinese enterprises need to deepen brand building and gradually move from being flow and product oriented to being brand oriented.