Until the end of last century, China had been staggering in developing its own carbon fiber technology that remained at a low level inefficient for the production in commercialization scale, and the carbon fiber needed for composite materials had to be imported. It is the wet-spinning process, the technological breakthrough laying a foundation for the new product with high-tenacity carbon fiber that characterizes the tensile strength of T700 and the excellent surface structure of T300.

According to the statistics from China Chemical Fibers Association (CCFA), Polyester, of all the manmade fibers, accounts for a lion share of 81.53 percent, with 47.51 million tons of polyester fiber produced out of the total manmade fiber production that reached 58.27 million tons in 2019. However, carbon fiber with its meager output, is the best known  for its special properties found unrivalled when it comes to the particular areas of applications like aviation, aerospace, military arms, electronics etc. in national defense, and wind turbines and civil engineering constructions etc.

Polyacrylonitrile (PAN) is widely used in a large number of applications in textiles, water purification, air filtration, and protective clothing, and perhaps you are not aware of the fact that the most value-added materials from PAN is the carbon fibers made from PAN precursor fibers in spite of other precursors such as pitch and rayon. 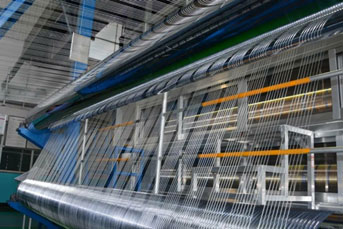 Weihai Tuozhan Fiber Company Ltd. of GF Composite Materials Corporation has established a complete R&D and 1000 ton carbon fiber industrialization system with PAN-based wet spinning process. The technological progress makes it possible for the company to turn out systematic technology and products based on the tensile strength, on the elongation modulus and on the bundle size and specifications, realizing high-performance carbon fiber production and application in large scale.

It is the wet-spinning process that surpassed the similar products level seen in Japanese Toray in terms of the dynamic indicators for the specifications of T300 and T800, and the product performance stability is on par with the Japanese company. In the context of multi-spinning positions, the technological breakthrough at the rate of 300m/min enables the spinning speed to have been raised by as much as over 1.5 times in the wet-spinning process, laying a foundation for innovation confidence in the industry. For the new product with high-tenacity carbon fiber, its tensile strength and modulus has reached the level of Japanese Toray’s T700 carbon fibers. And the interface performance of this carbon fiber-reinforced composite materials is even better than that in Toray because Toray only has dry-wet-jet spinning process with no wet spinning process at all in the T700 category. With this, the experts who gathered here in Weihai Tuozhan Fiber Company Ltd. of GF Composite Materials Corporation for evaluating this innovation project have agreed that the company has independently created a new carbon fiber product that characterizes the tensile strength of T700 and the excellent surface structure of T300.

Until the end of last century, China had been staggering in developing its own carbon fiber technology that remained at a low level inefficient for the production in commercialization scale, and the carbon fiber needed for composite materials had to be imported, as impacted by the lack of the precursor preparation technology. Needless to say, the complete importation of the much-needed carbon fiber posed a latent risk to a healthy development of national economy. It is all the more urgent for China to develop its own in-house technology for carbon fibers used in high-end equipment in many important areas of applications so as to secure a key material supply chain in the country. 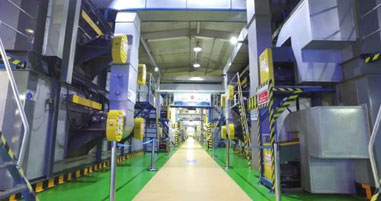 PAN-based carbon fiber preparation has a long process flow, covering precursor manufacturing, spinning, pre-oxidation(stabilizing), carbonizing, surface treating etc., and the carbon fiber out of the wet spinning process in PAN polymer dope has a unique surface groove structure, favorable for increasing the interface performance of the carbon fiber resin-based composites which are used as structural materials.

Weihai Tuozhan Fiber Company Ltd. of GF Composite Materials Corporation has successfully controlled the defects of the carbon fibers made from the traditional wet spinning process that used Dimethyl Sulfoxide(DMSO) as polymer dope and also well controlled the fiber cross-sectional morphological structure and ensured consistency of multi-spinning position plus multi tows process status. By solving the technical problems, the company can meet the needs of the carbon fiber performance for high-end applications compatible to the series fiber specifications. All of these results are made possible, thanks to the collaborative efforts among the company, Beijing University of Chemical Technology, Fudan University of Shanghai and other R&D institutions, to renovate the traditional DMSO precursor fiber process with independent creative technology for commercialization scale, coupled with key-equipment renovations and many other technical breakthroughs.

It is clearly understood that the carbon fiber is as much of the strategic industry in China as are the other sectors of economy found profoundly important to the national development strategy.