Union Budget 2017-18 gets a thumbs up from textile industry

"Though a marginal increase, yet the entire textile industry is in support of the measures allotted by the FM Arun Jaitley in the Union Budget. Total budget allocation for the textile ministry is Rs 6,226.5 crores for fiscal 2017-18 against last year’s revised allocation of Rs 6,286.1 crores. Budgetary allocation for powerloom, silk and wool textile sectors have increased and handloom and handicraft sector were also allocated sizable amount of funds. Salient features include:"

Though a marginal increase, yet the entire textile industry is in support of the measures allotted by the FM Arun Jaitley in the Union Budget. Total budget allocation for the textile ministry is Rs 6,226.5 crores for fiscal 2017-18 against last year’s revised allocation of Rs 6,286.1 crores. Budgetary allocation for powerloom, silk and wool textile sectors have increased and handloom and handicraft sector were also allocated sizable amount of funds. Salient features include: 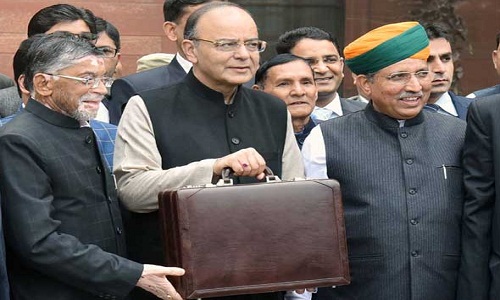 Government’s flagship technology up-gradation scheme ATUFS receives an allocation is Rs 2,013 crores for  2017-18, which has been welcomed by the industry at large. Scheme for in situ upgradation of plain power looms received Rs 68.31 crores, which is a big boost form Rs 48 crores last year. Under this scheme, power loom owners would get support to upgrade weaving technology without replacing the whole loom.

Allocation under Remission of State Levies has increased sizably to Rs 1,555 crores. This scheme includes refund of state taxes to garments exporters to make the industry competitive and boost employment. Fund allocation under Pradhan Mantri Paridhan Rojgar Protsahan Yojna is Rs 200 crores. This new scheme provides the Employee Pension Scheme contribution of 8.33 per cent of the employers for all new employees enrolling in EPFO under PMRPY for the first three years of their employment. This will boost employment by incentivising employers and improving competitiveness. Integrated Scheme for Skill Development for the textile sector receives Rs 174 crores, which is operational for last several years for under skilled factory workers.

Basic custom duty on Nylon mono filament yarn (for use in long line system for Tuna fishing only) has been reduced to 5 per cent (from earlier 7.5 per cent). Textile and apparel industry would benefit from Trade Infrastructure Export Scheme (TIES) with an allocation of Rs 3.96 lakh crore. Higher income and spending by rural India will stimulate consumption of textiles and apparels.

Reduction of corporate tax by 5 per cent to MSME (turnover below Rs 50 crores) will benefit textile and apparel industry as majority of enterprises fall into this category. Further, additional allocation to banks for NPA accounts, cashless transaction, labour reforms and relaxation of FDI norms by abolishing Foreign Investment Promotion Board (FIPB) would also benefit the industry.

Prabhu Damodaran, Secretary, Indian Texpreneurs Federation says the Budget focuses on aggressive spending in infrastructure, which will reduce logistics expenses. Ajay Sahai, DG Federation of Indian Export Organisations, observes the Budget is a roadmap for textile sector. Infrastructural development will not only boost domestic textile market but also ease exports by reducing logistics costs. A new and restructured central scheme with a focus on export infrastructure, namely, Trade Infrastructure for Export Scheme has also been announced.

Ujwal Lahoti, Chairman, The Cotton Textiles Export Promotion Council (TEXPROCIL) welcomed the Budget and appealed to restore some of the incentives relating to interest subvention for merchant exporters and cotton yarn and MEIS benefit for cotton yarns. The job creating package for textile sector found a worthy mention in latest Economic Survey 2016-17. However, the made-ups sector which is included in the package still awaits the rates on ROSL scheme (Refund of State Levies). He said he hoped the rates will be announced soon so that the sector could take advantage of this path breaking scheme.

He further stated that the Economic Survey 2016-17 has expressed concern on Indian exporters of garments/textiles being disadvantaged on account of absence of Free Trade Agreements (FTAs). The Survey estimated an FTA with EU and UK can lead to almost 1 lakh additional jobs being created in the garment sector apart from an increase in exports of $2 billion. If fabrics and made-up industries are also included in this calculation, the exports can easily increase to $3.5 billion and an additional 1 million jobs can be created. With these FTAs taking time, government should immediately consider giving an additional benefit of 3 per cent MEIS for exports of made-ups to EU so that the adverse impact can be mitigated to some extent, till such time the FTA is signed.

M B Raghunath, President (Sales & Marketing), Mafatlal Industries welcomed the Budget and said the garment sector will get a boost on long term basis due to 35 per cent increase in government expenditures in Rural Infrastructure Development Rural investment and rural economic improvement will boost demand for textiles and garments. Small & medium scale textiles and garment manufacturing companies will benefit. Indirect taxes are not addressed by the FM because the same will be addressed at the time of GST implementation.

“An inclusive Budget with a clear focus on agriculture, infrastructure, digitization and employment generation. Medium and Small Enterprises (MSMEs) are the backbone of the industry and generate the maximum employment. Tax cut for the MSMEs with an annual turnover of Rs 50 crore is a welcome gesture and will drive the growth engine as most of India's companies will get this benefit of 5 per cent tax reduction which will be a relief for them,” says Deepak Chiripal, CEO, Nandan Denim.

Textile industry is one of the largest employers in India and contributes about 14 per cent to industrial production, 4 per cent to the GDP and gives direct employment to around 45 million workforces. Expanding tax net by increasing tax limit slab up to Rs 5 lakh will give more money into low-medium income groups. This move will give more money into hands of such people which will trigger more demand in markets. After short-term sluggish demand due to demonetisation, this will surely help to boost the market sentiments. Considering the benefits provided to the poor including affordable housing, it is a good budget for the poverty stricken as it mainly focuses on the rural economy.