"With speculation about the US President Trump imposing 20 per cent or other duty on Mexican imports, Mexico could slap ‘mirror’ tariffs against US fabric and apparel imports. This move is slated to negatively impact cross-border manufacturers and retailers. Analysts say for the US to come out with any other compensation treaty to avoid any trade deal damages."

With speculation about the US President Trump imposing 20 per cent or other duty on Mexican imports, Mexico could slap ‘mirror’ tariffs against US fabric and apparel imports. This move is slated to negatively impact cross-border manufacturers and retailers. Analysts say for the US to come out with any other compensation treaty to avoid any trade deal damages.

This statement came at a time when Mexico is set to begin negotiating the North American Free Trade Agreement (NAFTA) by May to meet Trump’s calls for a rewrite. That said, Mexico’s economy minister Ildefonso Guajardo said in mid-January that if Trump imposes a tariff or a border adjustment tax, Mexico would pursue ‘mirror actions’. This indicates the growing tensions between the two neighboring countries, longtime allies, as Trump pursues his plan to build a wall along the border and claims Mexico will pay for it. The 20 per cent tariff or other duty proposal forms part of the plan to fund the wall. Owing to such brewing tension, a possible trade war has strained diplomatic relations and unleashed a nationalist uproar in Mexico with populist groups calling for consumers to boycott American companies including Wal-Mart, Starbucks and McDonalds. 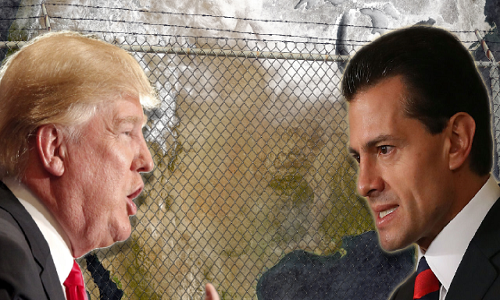 In 2016, the textiles and apparel sector grew 5 per cent as strong local apparel sales offset a 4.3 per cent drop in US sales. Going by such a scenario, local sales could grow 7 per cent compared to 10 per cent in 2016. Amid strong anti-American sentiment, local-brand turnover could eclipse US brands for the first time in recent memory.

Many consumers could shun Walmart in lieu of Mexican archrival Coppel or choose to buy at department-store chain Liverpool’s lower-end unit Fabricas de Francia. Mexican fashion designers, long in the shadows, could win consumer hearts. This is bad news for the likes of the Axo or El Palacio de Hierro network, which have grown by bringing aspirational US brands such as Calvin Klein, Tommy Hilfiger and Abercrombie & Fitch south of the border.

To meet the challenges, Mexican apparel producers are seeking new markets in Central America and Europe with which Mexico has a largely vague free-trade agreement. Costa Rica, Panama and Central America could be good markets to compete on price and quality but not Argentina and Brazil, because they have very strong industries and brands. In Europe, Mexican fashion jean labels Oggi and Siete Leguas could make successful forays because they have high-quality products using innovative fabrics and new washing technologies. These companies sell premium jeans to Levi’s, Wrangler and True Religion so they could also start selling in Europe. That will require even more innovation, training and other investment the industry has been slow to pursue.