"The latest edition of Intertextile Shanghai Apparel Fabrics-Spring Edition took place against the backdrop of uncertainty in global textile markets – indeed, the  economy was on everyone’s mind. And while some in the industry are feeling the impact of China’s slowdown, many international exhibitors at the fair reported little or no impact from the economic situation."

The latest edition of Intertextile Shanghai Apparel Fabrics-Spring Edition took place against the backdrop of uncertainty in global textile markets – indeed, the economy was on everyone’s mind. And while some in the industry are feeling the impact of China’s slowdown, many international exhibitors at the fair reported little or no impact from the economic situation.

Wendy Wen, Senior General Manager, Messe Frankfurt (HK) explained on Wendy Wen, Senior General Manager, Messe Frankfurt (HK) explainedthe final show day said they expected sentiment to be down somewhat this year but were pleasantly surprised by the relative optimism from exhibitors and buyers. “It is reasonable to say the industry in China is going through a period of change but it is far from in decline, with the development and growth of this fair over the last year a strong indicator of this. We need to keep things in perspective as well: with overall growth remaining above 6 per cent for the foreseeable future, this will still present many opportunities for overseas suppliers in China,” she said. 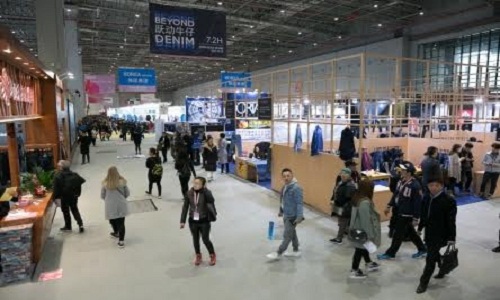 As further proof that the industry is more resilient than assumed, particularly in China, the visitor figure raised once again, the third consecutive increase since the Spring edition’s move to Shanghai in 2014. The new record set was over 71,000 buyers (which includes buyers from the concurrent Yarn Expo, CHIC and PH Value fairs who also entered the Intertextile Shanghai halls), around 13 per cent increase compared to 2015 (62,649). Wen said they were not expecting such strong growth in buyer figures this year given the macroeconomic climate. However, more than 500 extra exhibitors (3,155 from 27 countries and regions) would have played a part in the increase.

Confident about the future

At the show across various product categories, exhibitors in the International Hall were cautious yet positive about the Chinese and global textile industry in the coming year. Explaining that their regular buyers had already placed orders and they had received many new enquiries as well, Jose Maria Loren from Spain’s Luca Cuccolini, an accessories supplier, commented that the economy will not affect the industry much. This exhibition is good to attract buyers not just from China, but also Asia, so it helps us to sell our products throughout the region, he opined.

French company, Malhia Kent was also optimistic about the future. “The high end of the market will always be resilient here; it’s slowed down recently but it’s not getting worse,” said Aris Arakelian, Commercial Manager. “We received one big order and a few others on the first day of the fair, and our turnover in China has been very good,” he added.

Buyers reiterated the sentiment of exhibitors. As Yuan Hui, a sourcing representative for Chinese apparel brand 15 Hours opined, mid to high range apparel market is the core of their business and is largely unaffected by the economy. Hui also appreciated the organisation of the exhibitors in country and product groupings that allowed him to easily source his target fabrics. “The fair gives me a comprehensive range of products for selection, so despite the size, I can find exactly what I’m looking for,” added Hui.

Intertextile Shanghai Apparel Fabrics-Spring Edition 2016 was held at Shanghai, China during March 16 to 18, 2016 and was co-organised by Messe Frankfurt (HK) Ltd; the Sub-Council of Textile Industry, CCPIT; and the China Textile Information Centre.