"The 48th edition of Hong Kong Fashion Week for Fall/Winter which concluded this week hosted 15,000 buyers from 77 countries during the four-days. HKTDC Deputy Executive Director Benjamin Chau noted the fashion industry is facing immense challenges amidst economic and political uncertainties and lacklustre retail sales. “In spite of that, Hong Kong companies are versatile and with e-commerce developing steadily, companies can capture the opportunities to turn the situation around. "

The 48th edition of Hong Kong Fashion Week for Fall/Winter which concluded this week hosted 15,000 buyers from 77 countries during the four-days. HKTDC Deputy Executive Director Benjamin Chau noted the fashion industry is facing immense challenges amidst economic and political uncertainties and lacklustre retail sales. “In spite of that, Hong Kong companies are versatile and with e-commerce developing steadily, companies can capture the opportunities to turn the situation around. At this year's Fashion Week for Fall/Winter, buyer numbers from Italy, Iran, Germany and Israel saw good growth. This shows that buyers from certain regions are not as cautious as expected and their sourcing sentiment is gradually improving.” 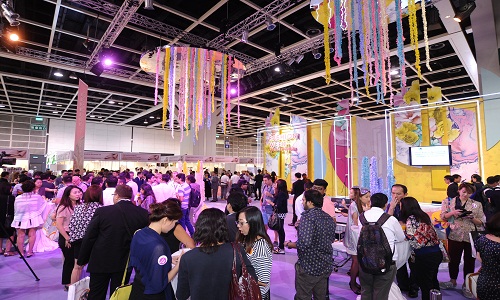 Buyers from emerging markets demonstrated a more positive sourcing sentiment at the fair. Muhammad Yasin, Owner of United Arab Emirates’-based company Imperial Clothing FZE, said he had visited more than a hundred exhibitors on just the first day of the show, and identified about 15 potential suppliers from Hong Kong, the Chinese mainland, Vietnam and Pakistan. He expected to work with two of the companies and place initial orders worth about $10,000.

Israeli buyer Moshe Silverstain said that, after the fair, he would visit some of the supplier factories in Nanjing and expected to place orders for 12,000 raincoats and 20,000 denim trousers. Russian company Forward, which supplies sports uniforms for Russian national teams, visited the fair. The company’s Head of Logistics Department, Ruben Nariyants, said his company had found three potential suppliers from the mainland. To facilitate smooth delivery to Russia, Nariyants said his company is willing to offer logistics assistance; and he expected to finalise cooperation arrangements soon.

Hong Kong Fashion Week has long been a launch pad for up-and-coming young designers to showcase their designs to international buyers. This year, the HKTDC organised two Fashionally Collection shows to spotlight emerging local designers from 14 fashion labels. Buyer Takayuki Kubota from renowned Japanese fashion group HP France said he had found suitable Hong Kong designer collections through the Fashionally Collection shows and expected to place initial orders of five to ten styles per brand. He was glad that Hong Kong designers were willing to accept small-quantity orders. Singaporean buyer and designer Samuel Wong said customers in Singapore are receptive to designer brands. He attended the fair to source designer collections and was in talks with Hong Kong label MODEMENT for its women’s and men’s apparel.

Korean department store Shinsegae which opened an e-shop was there too. Mae Hong, the company’s Buying Manager, said she came to Hong Kong Fashion Week for the first time to look for blouses and knitwear for kids and adults and found three potential suppliers and was in advanced talks with them. She was hoping to buy at least 1,000 pieces per item. Nitin V Tewari, Senior Manager at Flipkart also visited the fair for the first time. With fashion being their biggest business segment, he hoped to find new brands and OEM manufacturers and identified a number of suitable bags and sportswear brands. He anticipated purchasing between $50,000 to $100,000 per order.

Zalora’s Head of Acquisition, Giovanni Maria Musillo, spoke at the seminar titled ‘Zalora: Navigating the Wave of Omni-Channel Retailing’ and shared keys to success and opportunities in omni-channel retailing. “Smart phone penetration in Southeast Asia is set to exceed 100 per cent by 2019 and that is conducive to e-commerce development. It is also expected that the market share of fashion in e-commerce would double from four per cent in 2015 to eight per cent in 2019. All these signify immense business opportunities. With the ‘Korean wave’ sweeping across Asia and Europe in recent years, ZALORA is also actively sourcing different Korean brands to further capture the opportunities,” he said.

Hong Kong Fashion Week for Fall/Winter saw more than 1,500 exhibitors from 21 countries and regions to showcase the latest fashion collections of international brands, garment, accessories, fabrics and sewing supplies. More than 20 fashion events were organised during Fashion Week, including 10 fashion shows as well as industry seminars and networking activities. The Hong Kong Fashion Week for Spring/Summer will be held from July 10-13, while the second edition of Centrestage will run from September 6-9.