"The National Democratic Alliance (NDA) government has allowed 100 per cent foreign direct investment (FDI) in e-commerce marketplaces. And the Department of Industrial Policy & Promotion (DIPP) has clarified that the FDI is only for the marketplace format of e-commerce and not for inventory-led models. It has defined e-commerce as buying and selling of goods and services including digital products over digital and electronic networks."

The National Democratic Alliance (NDA) government has allowed 100 per cent foreign direct investment (FDI) in e-commerce marketplaces. And the Department of Industrial Policy & Promotion (DIPP) has clarified that the FDI is only for the marketplace format of e-commerce and not for inventory-led models. It has defined e-commerce as buying and selling of goods and services including digital products over digital and electronic networks.

The announcement comes just ahead of Chinese major Alibaba’s proposed entry into India. Also, the move coincides with a recent markdown of valuation of e-commerce companies. Some prominent e-commerce marketplace players in India are Flipkart, Snapdeal, Paytm and Shopclues. American major Amazon, Flipkart’s biggest rival, entered India as a fully-owned online marketplace player two years ago. Till now, only 51 per cent FDI was permitted in multi-brand retail. The sector had got an estimated $10 billion (Rs 65,000 crores)FDI since its beginning a decade ago. In 2015, around $5 billion (Rs 32,500 crores) of foreign funds were raised by e-commerce companies. Till now, policy guidelines had stated that no FDI was permitted in e-commerce.

Deep discounts: A thing of past 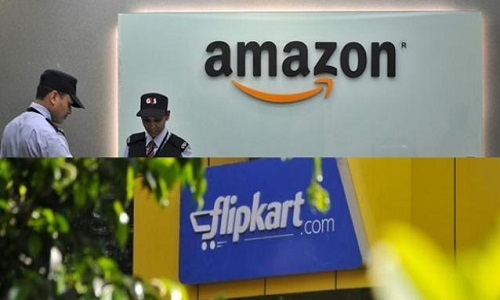 The new policy will hit big e-commerce players such as Flipkart, Snapdeal and Amazon India who till now made a killing through deep discounting. The new policy puts at risk high-profile events such as Flipkart’s Big Billion Day sale during the festive season and Amazon’s Independence Day sale. It was the high flying sales of these companies which were dependent on the high discounts offered by the companies. And the sales resulted in the high valuation of Flipkart, Snapdeal and Paytm. These deep discounts had attracted the ire of brick-and-mortar firms who were losing customers to online retailers. In fact, they had lobbied with the government to rein in the e-commerce firms.

Online marketplace platforms, with players like Amazon, Flipkart, Snapdeal among others hosted thousands of sellers, were described as technology enablers rather than e-retailers. They claimed to have no inventory of their own. That kept them going even with a ban on FDI in e-commerce. The government has now put an official stamp on how these e-commerce majors have for many years operated their business.

The deep discounting by e-commerce firms has attracted the ire of offline stores, which are fighting to survive after losing customers to their online rivals. Offline retailers have lobbied hard with the government to rein in e-commerce firms. “E-commerce entities providing marketplace will not directly or indirectly influence the sale price of goods or services and shall maintain level playing field,” according to a note released by the Department of Industrial Policy and Promotion (DIPP). This means that the imaginative methods used by Flipkart, Snapdeal and Amazon India in funding discounts may have been outlawed.

For instance, Amazon funds discounts by sellers indirectly through a route it calls “promotional funding”. This is how it works: Amazon recommends the amount of discounts to its sellers on products, but doesn’t force them to adopt these suggested prices. Sellers, however, end up keeping these suggested prices because Amazon finances the discounts. At the end of a certain period, sellers send a debit note to Amazon. This note contains the amount of discount that the seller gave on apparel, electronics, toys and other products sold on the site. Amazon then pays the seller by cheque.

Payments and e-commerce firm Paytm offers discounts through so-called cashbacks. Often, the company gives cashbacks—anywhere between 10 and 80 per cent—on products instead of direct discounts; these cashbacks are then returned to customers’ Paytm wallets and are used to buy other products. Then, there’s the matter of sales contributed by a single seller. Flipkart’s largest seller WS Retail Services easily generates more than 25 per cent of the company’s sales; Cloudtail India, the biggest seller on Amazon India, contributes even more. Cloudtail India, a joint venture between Amazon.com and N R Narayana Murthy’s Catamaran Ventures, is now the key growth driver for Amazon India, generating at least 40 per cent of the company’s sales in some months,. Cloudtail is particularly dominant in electronics and fashion sales, two of the three largest categories for Amazon India (promoted by Amazon Seller Services). The new regulations mean that Flipkart and Amazon India may have to find new seller entities on their platforms.

Many in the retail industry believe that curb on deep discounting will help e-commerce companies spend less on advertising, thus helping them to control their losses. So even if there may be a drop in sales, the companies would be cutting down on their losses. Also, the clause provides a more level playing field between the better-capitalised companies, and those that haven’t received the same amount of funding. It will, as Anil Talreja, Partner at Deloitte Haskin & Sells, points out, will sanitise the whole supply chain. The worst hit by the discount clause, consumer electronics and cellphone makers, are hoping that pricing parity will put an end to predatory pricing in the industry and lead to sustainable growth of the e-commerce marketplace. And as Amarjeet Singh, partner, tax, KPMG in India opines although, some of the structures practiced by existing players may require alteration, it will give the much-needed clarity to undertake business with certainty in longer term. Also, this will further boost foreign investment in this sector. And Kishore Biyani, Chief Executive of Future Group, believes the policy addresses brick-and-mortar retailers concerns and will also prove beneficial for online retailers in the long run.

The government has also made it clear that no one group company or seller on a marketplace can contribute more than 25 per cent of the sales generated on the site.