ESCAP and Kazakhstan affirm to work together

"Under the Agreement that supplements the Host Country Agreement, the Government of Kazakhstan has committed to provide the premises for the ESCAP’s Sub regional office for North and Central Asia (SONCA) along with a recurring annual grant for operational and programme costs of the office."

The United Nations’ Economic and Social Commission for Asia and the Pacific (ESCAP) and the Government Kazakhstan have affirmed their commitment to work in unison to address the critical social and economic development needs of the people of North and Central Asia by way of a new Agreement signed in Bangkok today.

Under the Agreement that supplements the Host Country Agreement, the Government of Kazakhstan has committed to provide the premises for the ESCAP’s Sub regional office for North and Central Asia (SONCA) along with a recurring annual grant for operational and programme costs of the office. 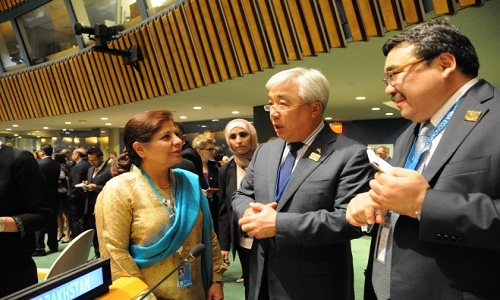 Incidentally, the office was opened in Almaty on 5 July 2011 upon the initiative of the Government of Kazakhstan and in line with a United Nations General Assembly Resolution to better address development priorities of member states and to strengthen regional cooperation and integration for accelerating progress towards achieving inclusive and sustainable development.

According to United Nations Under-Secretary-General and Executive Secretary of ESCAP, Dr. Shamshad Akhtar the signing ceremony marks an important step in the UN’s journey towards making a meaningful contribution to the development of the North and Central Asian sub-region.

He concluded by saying that the conclusion of the Agreement would help in cementing the status of the office and provide assurances for its continued functioning, reinforcing the proposed role of Almaty as the hub for United Nations offices in Central Asia.

H.E. Mr. Marat Yessenbayev, Ambassador Extraordinary and Plenipotentiary of Kazakhstan to Thailand and Permanent Representative to ESCAP observed that the day’s ceremony was an important step in the expansion and deepening of cooperation between ESCAP and the countries of North and Central Asia.

He added that the agreement would bring upon Kazakhstan even greater responsibility in his country’s work in different UN institutions.This is especially important given the fact that Kazakhstan has become a non-permanent member of the UN Security Council, he added.

SONCA works with Armenia, Azerbaijan, Georgia, Kazakhstan, Kyrgyzstan, the Russian Federation, Tajikistan, Turkmenistan and Uzbekistan using its normative and analytical work, policy advocacy and capacity-building activities, as well as promotion of regional cooperation to help speed up regional progress towards the Sustainable Development Goals (SDGs). Afghanistan participates in the activities of the NCA as a member of the United Nations Special Programme for the Economies of Central Asia (SPECA).