"As Robert Sinclair, COO of LF Sourcing observed at the recent Prime Source Forum (PSF) conference in Hong Kong, Vietnam with or without TPP, remains a good sourcing destination, but warns it has its limitations. Sinclair compares the country's population of just over 90 million to that of China's Guangdong province, which has a labour pool of 104 million."

While all member countries stand to benefit from Trans-Pacific Partnership (TPP), Vietnam is poised to be TPP’s biggest winner. According to a study, compared to a baseline with no TPP -- Vietnam’s income gains in 2025 with a comprehensive TPP would be over 13 per cent higher, while its exports in 2025 would be over 37 per cent greater. Much of these gains would come, especially initially, from Vietnam’s growing production and export of apparel and footwear, resulting from the phase out of high duties in TPP partner countries, especially the United States and Japan. 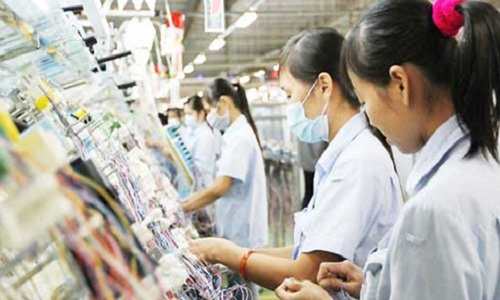 While acknowledging this potential, a number of industry executives are expressing a degree of skepticism about whether Vietnam will be sufficiently prepared to fully appreciate any benefits from countries investing in its economy - and more specifically, its textile and clothing industry.

As Robert Sinclair, COO of LF Sourcing observed at the recent Prime Source Forum (PSF) conference in Hong Kong, Vietnam with or without TPP, remains a good sourcing destination, but warns it has its limitations. Sinclair compares the country's population of just over 90 million to that of China's Guangdong province, which has a labour pool of 104 million. “If we have to factor that in, there is a limitation on what they're going to be able to produce and therefore benefit from TPP as a manufacturing country.” He believes this uncertainty means the door is left open for the Asian subcontinent in general and India in particular.

Li & Fung grew its business in Vietnam by 50 per cent, making it the company's second-largest sourcing destination after China between 2014 and 2015. The company employs 325 staff in the country and is obviously a big proponent of it. But even so, Sinclair reiterates concerns over its threshold and limitations.

Raphael Madarang, Director of global trade compliance and supply chain solutions for APL Logistics believes Vietnam faces a number of challenges if it is to take on the volume of business expected as a result of the fall-out from China, particularly from an infrastructure perspective. He mentioned this in the back drop of the news that Vietnam could experience a manpower shortage by 2017 and 2018, so they may not have enough people to run the factories and the mills.

One of the unique features of the TPP for textiles is that it has a yarn-forward rule of origin, which means the yarns used in the products should only be sourced from member countries. Vietnam, however, sources a large amount of yarn from China, a non-TPP country. Ultimately, this means Vietnam will have to make up for that production with a substantial investment in domestic spinning and dyeing facilities. Madarang felt, from a logistics standpoint, there is going to be a lot of movement in raw materials. He also expects a possible movement of raw materials from the US to Vietnam in order for them to capture this benefit since there is also a lot of yarn production in the US.

A potential solution to this situation is seen by cotton yarn, fabric and garment supplier Texhong Textile Group is foreign investment. The China-based company began investing in Vietnam in 2006, and last year invested in 500,000 new spindles, bringing its total in the country to 7 million. In 2015, around half of Texhong's capacity came from Vietnam, making it one of the first enterprises in China to have more capacity abroad than at home.

Explains Hong Tianzhu, CEO of Texhong that for Vietnam to enjoy TPP benefits and avoid a shortage of fabrics, there is a need for more weaving plants. In a bid to meet that potential demand, the company is building a 3,300 sq. ft. integrated industrial park in Quang Ninh Province to support the future development of Vietnam's textile industry. The so called Vietnam Galaxy project will include weaving, dyeing and apparel production facilities, and is due to begin production in 2017.

Texhong's investment will not only serve Vietnam's needs, but also help alleviate some of the pressure from higher costs in China. Nonetheless, Tianzhu also has confidence in the consumer market in China, and so, in a further strategic move, is positioning the industrial park on Vietnam's Northeastern border to serve both markets. Despite Texhong's promise to offer Vietnam a sizeable supply of fabric and yarn, one Malaysian manufacturer believes it is in high end apparel that the country is still lacking. Prabakaran Kesavan, Founder of Venlaakwear International is of the opinion that the service level in China is well-established, as is its R&D. These things take time to be copied into other markets like Vietnam. So there is a time gap. But China is not going to be replaced by the TPP. Gradually maybe, and it will start with the downstream. But we are not in competition with China.

Shift from real to fake fur, is it sustainable?

"Customers may have shifted their preference from real to fake fur. But the fact remains, neither is fake nor real... Read more

Swiss Textile Machinery members can reduce the adverse effect on environmental footprint of the finishing industry Since the antiquity humans have... Read more

Often mistook to be a part of China, Taiwan is on a mission to establish its independent identity. Aiming to... Read more

Despite challenges, Fabscrap aims for a waste-free future

"The fashion industry is often referred to as the second-most-polluting business in the world as it contends with issues like... Read more