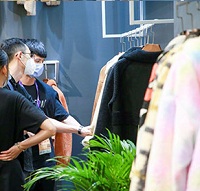 Menswear area showcased modern dandy styles with a waistcoat in contrasting colors and an English jacket, 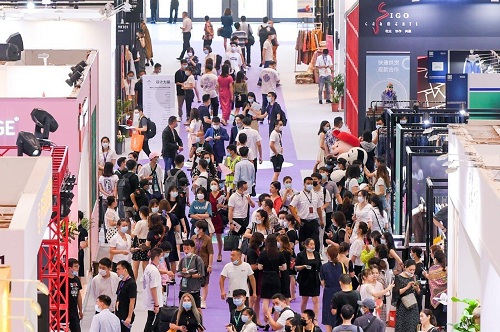 combined with casual trousers. The kidswear area showcased swinging silhouettes for girls, and fancy sweatshirts and jeans for boys.

CHIC Garden: The CHIC & GFS (Green Fashion Society) area showcased the amazing talent of artists Ma Defan and Li Haitao through CHIC Garden, an installation made of old clothes and fiber. The area featured sustainable products and collections such as DuPont / Sorona (USA), centdégrees (France), the Consinee Group (China), LangerChen (Germany / China), Sateri (Japan / China), Kingdom (China), Testex (Switzerland) or PIPING HOT from Australia, who work to preserve the ecosystems of the oceans. Following this was matchmaking meeting on sustainable hemp fiber products from Kingdom Holdings and the Sustainable Fashion Forum on the future of sustainable fashion.

CHIC Impulses: The Impulses design area showcased creations of over 100 designers including the Wa Yin or Yvonne Choi, Dumpty, QZ Shen Ding Jie with the label D. The presentation was accompanied by DouYin (TikTok), who presented their live streaming platform for fashion sales.

CHIC Winter: With 128 brands, CHIC Winter was the largest exhibitor area at the fair. The area was represented by Market leader Bosiden which presented its collection in collaboration with Jean Paul Gaultier. Another exhibitor Kopenhagen Fur launched its new collection in the Chinese market while young label Christopher Raxxy integrated modern designs with traditional Chinese elements in its collection

CHIC Shoes: The Chic Shoes area included the ‘Footwear Industry Forum in association with ‘Footwear News.’ This forum focused on topics such as the development of shoe fashion design and sales in the context of digital challenges, the sneaker hype and consumption, the behavior of the new generation of women on new trends, and innovative technologies in shoe production.

CHIC Match Making: The CHIC match-making zone held 54 meetings. One of the participants in this zone included the Little Red Book while international companies such as the French brand Capsule by Juliette and MGF Import & Export SRL from Italy also participated in this zone.

The CHIC App: The CHIC App supported networking at the fair by enabling visitors to interact with other participants

CHIC Talk: The CHIC Talk discussion forum held nine seminars on topics such as ‘How to make entertainment marketing under the domestic fashion trend’, ‘Apparel Manufacturing - from lean production to digitalization’, and ‘Digital solutions for the garment production chain.’