"The outcome may see Britain embark on at least two years of complicated divorce proceedings with the EU, raising questions over London’s role as a global financial capital and putting huge pressure on its Prime Minister David Cameron to resign. Friday morning, Europe woke up to the news that more than half of British voters in the country's EU referendum decided they no longer wanted to be a part of the 28-nation bloc."

The outcome may see Britain embark on at least two years of complicated divorce proceedings with the EU, raising questions over London’s role as a global financial capital and putting huge pressure on its Prime Minister David Cameron to resign. Friday morning, Europe woke up to the news that more than half of British voters in the country's EU referendum decided they no longer wanted to be a part of the 28-nation bloc.

With 52 per cent of voters supporting a decision to leave, against 48 per cent for remain, Britain’s highly divisive referendum has been closely watched by financial markets and politicians around the world. 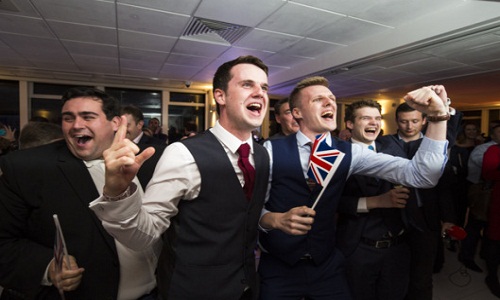 The pound plummeted to its lowest level against the dollar since 1985. The euro also fell 3.3 per cent against the dollar, its biggest one-day fall since the currency's inception. And Asian stocks dropped sharply as the markets began to digest the results.

In the run-up to the vote, major banks, corporations and governments around the world had warned against an exit from EU, including the IMF, who opined Brexit could cause ‘severe regional and global damage.’

Prime Minister David Cameron promised to hold one if he won the 2015 general election, in response to growing calls from his own Conservative MPs and the UK Independence Party (UKIP), who argued that Britain had not had a say since 1975, when it voted to stay in the EU in a referendum.

The EU has changed a lot since then, gaining more control over Briton’s daily lives, they argued. According to Cameron, It is time for the British people to have their say. It is time to settle this European question in British politics.

How long will it take to leave the EU? The minimum period after a vote to leave will be two years. During that time Britain will continue to abide by EU treaties and laws, but not take part in any decision-making, as it negotiated a withdrawal agreement and the terms of its relationship with the now 27 nation bloc. In practice it may take longer than two years, depending on how the negotiations go.

No nation has ever left the EU. But Greenland, one of Denmark's overseas territories, held a referendum in 1982, after gaining a greater degree of self government, and voted by 52 per cent to 48 per cent to leave, which it duly did after a period of negotiation.

David Cameron said he would be stepping down as prime minister by October. He said he would leave it to his successor to invoke Article 50 of the Lisbon Treaty, which kicks off the two-year process of negotiating a new trade relationship with the UK's former partners.

Britain leaving the EU will send shockwaves across the world, not least for its fashion industry, which contributed an estimated £26 billion ($38 billion) to the UK economy in 2014.

Luca Solca, head of luxury goods at Exane BNP Paribas said that the industry has to brace for more demand retrenchment. The most important consequence of 'Brexit', is a dent to global GDP prospects and damage to confidence. This is likely to develop on the back of downward asset markets adjustments. Hence, more than ever, the industry will have to work on moderating costs and capital expenditure.