US out of TPP, Australia, New Zealand to pursue 'TPP 12 minus one'

"President Trump took first step towards implementing his economic agenda --- signing an executive action removing the US from a free trade deal Trans-Pacific Partnership (TPP). This was one of Trump’s core campaign promises. The accord negotiated by the Bush and Obama administrations has been held. The Obama Administration had pushed for the 12-country regional free trade agreement, arguing it was a vital national security priority to compete with a rising China." 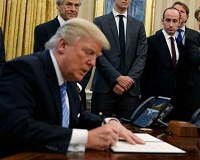 President Trump took first step towards implementing his economic agenda --- signing an executive action removing the US from a free trade deal Trans-Pacific Partnership (TPP). This was one of Trump’s core campaign promises. The accord negotiated by the Bush and Obama administrations has been held. The Obama Administration had pushed for the 12-country regional free trade agreement, arguing it was a vital national security priority to compete with a rising China.

TPP a non starter from the beginning

Trump’s decision not to join the TPP was expected as during his election campaign he railed against international trade deals, blaming them for job losses and focusing anger in the industrial heartland. 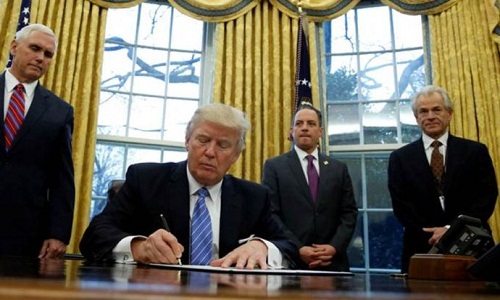 TPP negotiations had begun almost 10 years ago and designed to create major changes in the economies of the 12 signatory countries. The countries involved previously made up 40 per cent of the world economy. The agreement began as almost casual negotiations between New Zealand, Brunei, Singapore and Chile but rapidly expanded. The final agreement was signed by Brunei, Canada, Chile, Japan, Malaysia, Mexico, New Zealand, Peru, Singapore, United States, Vietnam and Australia. Each country needed to pass and ratify associated legislation for the partnership to begin.

What’s in it for fashion companies

A number of footwear and apparel brand and organisations, including the Footwear Distributors & Retailers of America and the American Apparel & Footwear Association as well as brands, such as Nike, New Balance, Gap, and Hanes, have been opposing TPP. These parties have cited the TPP's promise to eliminate more than 18,000 taxes and other trade barriers, strengthen ties among member countries and increase economic growth. According to Matt Priest, President, Footwear Distributors & Retailers of America, the TPP was all about the inclusion of Vietnam, a hub of shoe manufacturing, and that’s where lies the interest of American companies. If there are any better trade pacts to fructify tie-up with Vietnam, we would be keen to scrap the TPP. Agreeing on the same, Julia K. Hughes, President, US Fashion Industry Association, echoed this notion, that free trade agreements are important to our sector.

TPP-12 minus one the next step…

However, even though the US is out of the treaty others are promising to go ahead with the deal. Australia and New Zealand say they are hopeful of pressing ahead with the Trans Pacific Partnership trade deal, despite America's formal withdrawal. Australia has already devised a name for a possible new agreement: TPP 12 Minus One. The US-led, 12-nation agreement was set to cover 40 per cent of the world's economic output. Australian Trade Minister Steve Ciobo said on Tuesday it would require "a little bit of elbow grease" to orchestrate a plan B with the remaining TPP members, including Japan, Mexico and Canada, but goodwill remained to "capture the gains" made under the agreement.

Ciobo says he had conversations with Canada, Mexico, Japan, New Zealand, Singapore, Malaysia about the deal. "I know that there's been conversations that have been had with Chile and with Peru. So there's quite a number of countries that have an interest in looking to see if we can make a TPP 12 minus one work," he said. Ciobo also said the original architecture of the TPP was designed to enable other countries to join. So Indonesia has expressed a possible interest and there would be scope for China if they are able to reformulate it to be a TPP 12 minus one for countries like Indonesia or China or indeed other countries to consider joining and to join in order to get the benefits that flow as a consequence.

New Zealand Prime Minister Bill English too has said he is hopeful of keeping a free trade deal alive with remaining members of the TPP agreement, while the country's trade minister Todd McClay expected TPP ministers would meet in the coming months to navigate a way forward.

Meanwhile China, which was left out of the TPP deal, has its eye on its own regional trade pacts. It has suggested a Free Trade Area of the Asia Pacific and is supportive of the Regional Comprehensive Economic Partnership (RCEP), which could see a free trade deal between countries including Australia, China, India, Japan, South Korea and New Zealand.