Shri Ravinder Kumar Passi, Vice-Chairman-EPCH has been elevated as new Chairman of Export Promotion Council for Handicrafts (EPCH) during 164th meeting of Committee of Administration (COA) held on today informed Shri Rakesh Kumar, Director General – EPCH. Shri Passi has taken charge from Shri O.P. Prahladka. All members of Committee of Administration were present during the meeting.

Shri Kumar further said that Shri Ravinder Kumar Passi, representing M/S R.K. Arts, New Delhi is a leading handicrafts exporter from Northern region since last 26 years. He is associated with Export Promotion Council for Handicrafts (EPCH) since its inception and has served EPCH as its Chairman during 2001 and 2002.

He is very actively involved in various trade bodies. Shri Passi has also been the Co-Chairman of National Centre for Design 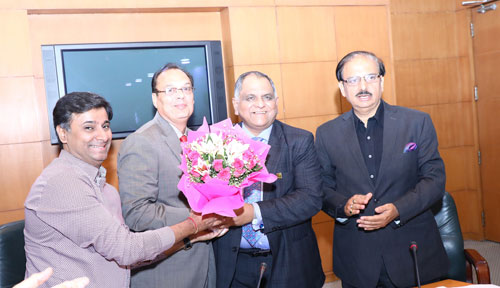 and Product Development [NCDPD] for many years.

Shri Passi expressed his gratitude to members of Committee of Administration of EPCH after taking over as Chairman of Export Promotion Council for Handicrafts, an apex organization for promotion of Exports of Handicrafts from the Country.

The exports of Handicrafts have shown an increase from Rs. 23029.36 crores (2017-18) to Rs. 26590.25 crores during the year 2018-19 [prov.] Showing an increase of 15.46% % over previous year. Shri Passi further said that in order to sustain this growth, the international marketing initiatives, cluster development projects, design and product development, new policy initiatives are needed to be pursued more vigorously.