The map drawn by financial advice site money.co.uk, established the most-searched-for fashion brand on Google in each country over the past year. As per the map top-ranked Louis Vuitton was “seen as the mark of success for the rich and famous for decades.” It adds: “Celebrities from Audrey Hepburn to Billie Eilish have donned the designer over the years, with recent ambassadors including Sophie Turner, Lea Seydoux and Thandie Newton.” In fact, Louis Vuitton tops the list in 47 countries, including the UK and Australia. 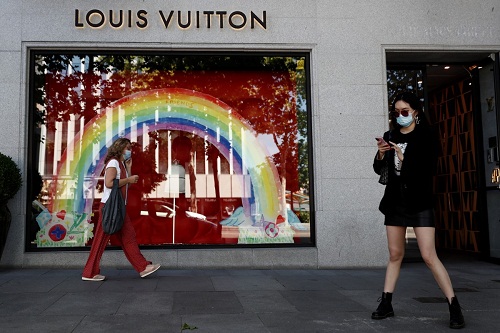 fourth place is Calvin Klein, most searched in 11 countries including Russia. Rolex is at fifth position with countries like Israel, Cambodia and Kenya making the brand their number one fashion search.

In Europe, Louis Vuitton is the clear favourite. However, in Greece, Gucci is favoured; Valentino is top in Croatia and Balenciaga is most-searched-for in Poland. The North and Central America map shows Loewe is the most-searched-for brand in the US and Canada, while in Mexico it's Gucci. Luxury leather goods label Coach is sixth and top in four countries including Saudi Arabia and South Korea, while New York label Tory Burch is seventh and the most-searched-brand in three countries including Jamaica.

Joint eighth and leading the way in two countries are: Loewe, the most-searched-for label in the US; Valentino and Fendi. In Oceania region, Louis Vuitton is far ahead as the most popular brand except in New Zealand, where it is Gucci.

In Asia, Louis Vuitton tops the fashion charts in Qatar, the United Arab Emirates and Oman. And Chanel is number one in Bali, Vietnam and Indonesia. Interestingly, India is the only country where Prada is the most popular fashion brand.

In Africa, again Louis Vuitton leads in most countries but the most-searched-for fashion brand in Egypt is Calvin Klein, while in Tunisia it is Fendi. In North and Central America, Canadians search for Loewe the most, Mexicans can't get enough of Gucci and St Lucia's top-rated brand is Ray-Ban.