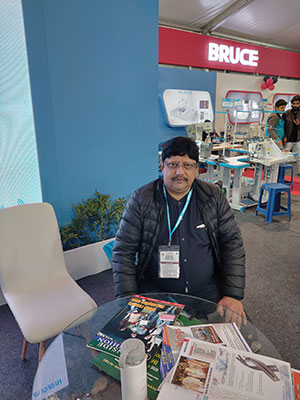 Jack Sewing Machine Co., a leading China-based sewing technology company, launched its new Internet of Things (IoT) technology at the Garment Technology Expo (GTE) held from January 10-13, 2020 in New Delhi. Sudhakar Varma, Director of the Indian operations of the brand elaborates on this launch and its other initiatives.

Jack Sewing Machines was launched in India around 14 years ago. “Seven years ago we opened a liaison office in the country which enabled us to penetrate deeper into the market. It also enabled us to support new agents and launch new machines,” notes Sudhakar Verma, Director of the India Operations of the brand. Today, Jack offers technologies like wi-fi with IoT. In coming days, each of its products will offer cut to pack solutions for the industry.

According to Verma, exporters are looking forward to digitalisation of the industry. “We are ready with the app. Once the concept is ready we will sell this to the exporters,” he says. The brand provides both low and high-end machines. “The future for high end machines is quite bright as they require less labor and are more productive. People are showing a greater interest in the hanger system as it reduces hanging time while increasing needle time,” he adds.

Verma also recommends an increase in duty drawbacks. According to him, the industry should reconsider the levying of import duty on machinery. “Procedures for obtaining the TUF loan should be simplified. Fifteen years ago, exporters were granted good duty drawback amounts. Today, these have reduced to two to three percent,” he says.

For the last five years Jack has been concentrating on its C level fabricators and other domestic machines. “These ensure us of 100 percent growth in the domestic market. As a lot upcoming brands make men’s and women’s garments, their demand for machines is growing.

Earlier people would compare Japanese machines with Chinese ones. “However, no one makes machines in Japan today. Japanese companies manufacture their machines in China predominantly and some of it in Vietnam as these countries ensure a better quality and service besides very flexible & versatile eco-system,” adds Verma and in the same breath says sadly India is still nowhere in the global supply chain in this part of business.

The company has received a fantastic response for its products at the GTE exhibition. “Especially, our spreading machine has received an excellent response and helpus increase our business,” adds Varma.

The growing importance of sustainability has unfortunately also given rise to greenwashing amongst fast fashion brands. As per an extra.ie... Read more