"The 56th India International Garment Fair, (IIGF) 2016 was inaugurated by the minister of state for textiles, Santosh Kumar Gangwar at Pragati Maidan, New Delhi. In his address, the minister highlighted the need to strengthen the apparel exports. Given its employment and export capacity, the apparel industry plays a significant role in the country’s economy."

The 56th India International Garment Fair, (IIGF) 2016 was inaugurated by the minister of state for textiles, Santosh Kumar Gangwar at Pragati Maidan, New Delhi. In his address, the minister highlighted the need to strengthen the apparel exports. Given its employment and export capacity, the apparel industry plays a significant role in the country’s economy. Several new initiatives have been undertaken by the government under the leadership of Prime Minister Narendra Modi to make development participative and inclusive, in line with the core governance philosophy of ‘Sabka Saath, Sabka Vikaas’.

Need to focus on apparel exports 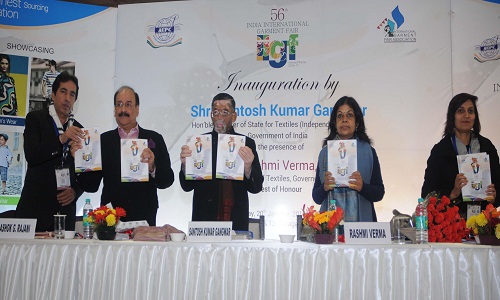 Rashmi Verma, Secretary Textiles, emphasized on the economic vision based on boosting manufacturing, growing exports and generating more and more employment. The idea is to embark on a path of inclusive and participatory growth. She explained that the objective is to showcase latest garment and fashion accessories trends shaping up. This sector being the highest employment provider in the manufacturing sector has a much bigger role and responsibility. India has the significant advantage of a young population offering huge potential for a demographic dividend by getting gainful employment in this sector with just three months of training, she added.

Ashok G Rajani, Chairman Apparel Export Promotion Council (AEPC) observed, that the garment export industry can generate 2,200 jobs with an investment of Rs 30 crores in land, building machinery and utilities. The unique feature of the industry is that with the Rs 30 crores investments, garment exports worth Rs 120 crores can be achieved, out of which, Rs 30 crores would go as wages to the workers. The textile industry accounts for 14 per cent of industrial production, which is around 4 per cent of India’s GDP. Out of 45 million people in the textile industry, 11.22 million people are in garment sector alone. Nearly 60 to 70 per cent workforce is of women, mostly from the weaker sections of the society. The garment export sector is currently worth $17,000 million, having a world market share of around 3.5 per cent only, he added.

Rajani said the 56th IIGF has attracted 809 buyers from across the globe, of which 259 have availed MAI benefits; there are 350 buying agents and 200 visiting buyers for the 56thIIGF. There are 322 participants for the 56th IIGF and number of buyers registered on the IIGF website is 1720. This data shows that the buyers across the world have stated showing faith and sees India to be a safe and compliant destination for sourcing garments, he said.

Expressing the concerns of garment export industry, he said they are concerned about Vietnam’s zero duty access to EU market. Vietnam exports are likely to grow faster due to implementation of zero duty from 2017. (India faces import duty of 9.6 per cent). Trans Pacific Partnership Agreement allows export opportunities in Vietnam to US with a benefit of 17-30 per cent export duty relief. India-EU Broad-based Trade and Investment Agreement (BTIA) are yet to be finalized, exporters are expecting faster conclusion of the talk so that they can compete with Bangladesh and Vietnam.

Talking about garment exports growth Rajani said, RMG exports were to the tune of $1,440.8 million in December 2015 with an increase of 5 per cent against the corresponding month of December 2014 which was $1,372 million. India’s RMG export to World in April-December of 2015-16 was to the tune of $1,2473.9 million which is up by 2.8 per cent compared to the same period of previous financial year. During April-December 2014-15, India’s apparel exports were to the tune of $1,2137.1 million. Rajani also requested the government to simplify the labour laws, which is the need of the hour.