"China is the perfect country for the world’s big sportswear brands with just the right mix of ingredients to fuel businesses in future. For athletic wear companies including Nike, Adidas, New Balance, and Under Armour, as well as activewear brands such as Lululemon, China offers the perfect market with its 415 million millennials; a booming middle class getting interested in health and fitness; government investment in sports; and a rapidly growing consumer appetite for sportswear—especially foreign brands."

China is the perfect country for the world’s big sportswear brands with just the right mix of ingredients to fuel businesses in future. For athletic wear companies including Nike, Adidas, New Balance, and Under Armour, as well as activewear brands such as Lululemon, China offers the perfect market with its 415 million millennials; a booming middle class getting interested in health and fitness; government investment in sports; and a rapidly growing consumer appetite for sportswear—especially foreign brands.

The US is still counted as the biggest market for sportswear. But it’s a mature and fiercely competitive one, much like Western Europe. In China, the rising tide is lifting all boats, even with increasing competition in the country’s sportswear sector. And brands have been cashing in. Nike, for instance, recorded growth of about 9.5 per cent last quarter in China. Adidas saw its sales jump 22 per cent in the country through 2016. This is just the start, believes Mark Parker, CEO, Nike. The opportunity is massive in China, according to Nike brand president Trevor Edwards. 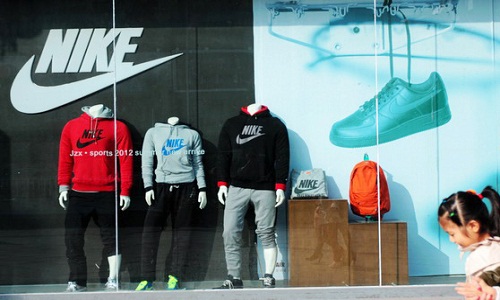 China has 415 million millennials, according to a 2015 report by Goldman Sachs—exceeding the 350 million or so people who make up the entire working populations of the US and Western Europe combined. China has the world’s largest middle class, and it’s still growing. Goldman Sachs estimates that the country’s aggregate income will grow by around $3 trillion in the next decade.

China’s millennial generation is different from the one that preceded it. It’s more globally connected because of technology, and has a strong consumer appetite, matched by rising purchasing power. Aided by economic development, there has been a substantial growth in new activities, especially sports. Gym membership in China has doubled since 2008, reveal figures from China Business Research Academy reported by (paywall) the Financial Times. And the number of marathons taking place in the country has grown six-fold over the past five years.

In order to become a global soccer superpower, China’s government has pledged to have more than 70,000 soccer pitches ready across the country by 2020. To accomplish the goal, Chinese president Xi Jinping announced plans to expand the country’s ‘sport economy’ to $850 billion by 2025, which would make it the world’s largest. The Chinese Government’s push for sports isn’t just about bragging rights. To reduce rising rates of health problems such as obesity and diabetes, it has also urged citizens to be more physically active. The country launched a national fitness plan through 2020 that will involve significant investment in sport and fitness facilities.

Euromonitor figures show last year, sales of sportswear jumped 11 per cent in China, while overall apparel sales rose just 5 per cent. Like countless shoppers around the US and Europe, Chinese consumers are developing a taste for activewear as everyday clothing. Colin Currie, Adidas’s MD for Greater China, says that consumers want a versatile piece of footwear, or they want apparel they can do sports in but also go to social occasions in. looking at the growing potential, Euromonitor estimates that China’s market for sportswear will surpass that for luxury goods by 2020.

Mid-market brands, such as China’s homegrown sports label Anta, could be the biggest beneficiaries of the new Chinese athleticism, since foreign brands such as Adidas and Nike are seen as fashion products as much as fitness ones. But Chinese shoppers also want the brand prestige and perceived quality of foreign labels, which gives companies such as Nike and Adidas an advantage over domestic rivals. Those two companies are actually China’s top sportswear brands by market share.