Retailers in US, Europe face uncertain future with second round of store closures

A resurgence of the pandemic in the US, Australia and some European countries has led to governments tapering off support for fashion businesses in these countries. Compounded by the stress of intermittent reopening and reclosing of stores, fashion retailers in these countries are planning to declare bankruptcy by the end of this year.

Despite US fashion retailers being allowed to operate during the crisis, they recorded a 7.3 per cent decline in merchandise revenues in the week ending July 19, reveals Affinity Solutions figures. Revenue of retailers in California, Texas and Arizona also declined. Revenues of California retailers declined by 19.9 per cent while those of Texas dropped 13.2 per cent and Arizona 18 per cent, states data from Opportunity Insights, a team of economists based at Harvard University.

Germany retailers, who closed down most of their nonfood shops for two months, also expects a 30 per cent decline in revenues, 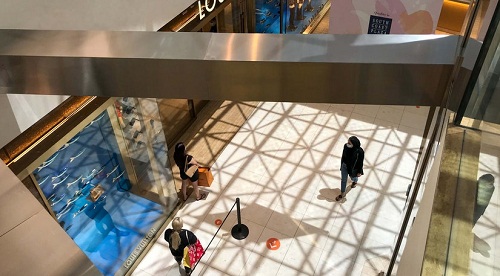 particularly in the fashion industry, says Neil McMillan, Director-Advocacy and Political Affairs, EuroCommerce, the association for retail and wholesale in Europe.

Both European and Australian retail associations expect the effect of second round of shutdowns to hit harder incase governments withdraw support schemes introduced during the pandemic’s first wave. The Australian government recently announced plans to reduce funds provided for unemployed workers via its job keeper support scheme by around three-quarters. UK also plans to end its equivalent employee support scheme in the coming months. In the US, support is still on its way as the two main political parties continue to debate over the stimulus packages. It may be too late before this support actually comes as many retailers like JC Penney, Neiman Marcus, Lucky Brand, Brooks Brothers and Ascena have already filed for bankruptcy.

Besides uncertain government support, retailers also have to deal with sporadic changes in restrictions. UK forced all its non-essential stores to close only two weeks after opening. Though these stores have started to reopen, they are facing a 42 per cent decline in footfalls. Retailers need a clear communication on closures and reopening to help them secure premises, plan furloughs and manage stock levels to minimize waste, says Simon Jenner, Director, Leicester Business Improvement District.

Rising virus cases often compels retailers to shutter stores even without government mandates. As US considers shopping to be a safer activity than going to gyms, bars or restaurants, it has directed only Californian stores enclosed within indoor malls to close, says Jason Brewer, EVP-Communications and State Affairs, Retail Industry Leaders Association. Hence, the country directed only

The country reopened about 14,000 shopping and retail firms on March 1. However, they were soon closed again, says data from business directory website Yelp. Some of the other stores in affected areas also plan to close soon. However, this constant shutting and opening process may take a huge toll on small businesses who are already struggling to secure their future.