The pandemic saw India emerge as the world’s second largest manufacturer of PPE kits, after China. The textile ministry encouraged many manufacturers to venture into PPE production essential for the fight against COVID-19, says a India Today report. Initially, manufacturers were apprehensive about entering a completely new domain. They faced logistic issues like sourcing yarn from Ludhiana and moving products from one location to another during lockdown. Bigger manufacturers could easily pivot into PPE. However, smaller ones like the Noida-based Sunlord Apparel faced many issues.

One major issue was the lack of knowledge amongst factory owners and workers about PPE manufacturing. As Indian manufacturers were not able to meet the required quality standards, the Textiles Ministry and industry chambers tried to educate them through Zoom calls. They also sent PPE samples to Coimbatore for testing in the early days. 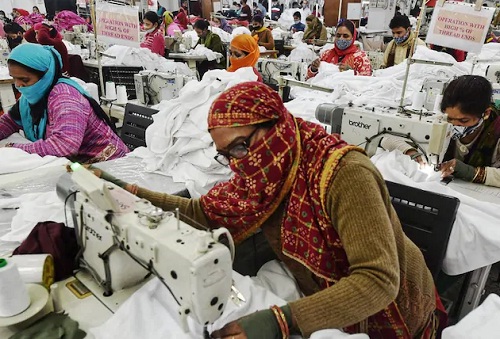 and Gujarat Chief Minister’s office allowed Welspun India to set up masks and PPE overalls manufacturing facilities and built the required ecosystem. This included knowledge transfer, sessions on R&D and testing facilities in every state. This led to India’s daily PPE suits production increasing to 500,000 with over 600 Indian companies now certified to manufacture PPEs.

The textile ministry also collaborated with manufacturers to set up PPE factories and import the equipment. Single window procurement agencies like Hindustan Lifecare were set up to issue guidelines on PPE kits manufacturing.

Government agency for investment promotion and facilitation, Invest India estimates the global PPE kits market to be worth $52 billion (Rs 3.8 lakh crore) while the India market is worth $1 billion (Rs 7,300 crore. In this, the percentage of medical textiles is relatively less. Earlier, this market was largely dominated by China and Indian manufacturers faced a tough time convincing villagers to work in PPE manufacturing factories. Factories had to allow workers to stay on shop-floors to allay fears of catching the virus.

This led to manufacturers like Matrix Clothing abandoning PPE kits manufacturing. Its abandonment has compelled the government and textile manufacturers to ensure a sustained quality and deliverability of medical textiles.

In 2020, demand for face masks and PPE led to 30.4 per cent jump in China’s textile exports, says General Administration of Customs. The government is also urging apparel manufacturers to aim for double digit share in global fabric exports. For this, the government proposes to upskill workers besides adopting latest technologies. It also proposes to set up seven mega textile parks across India.

Exploring its collaboration with industry leaders, the government needs to build on this momentum to strengthen India’s position in the global PPE market.