Global spandex market to grow at 8 per cent by 2023

"Estimated over 760 kilo tons in 2015, global spandex market is likely to exceed 1,550 kilo tons by 2023, growing at a CAGR of more than 8 per cent from 2016 to 2023. It is also commonly known as elastane. Asia Pacific, especially China spandex market size was the dominant region and accounted for more than 60 per cent of the total volume in 2015. China accounted for a major chunk of the market in Asia Pacific region in 2015."

Estimated over 760 kilo tons in 2015, global spandex market is likely to exceed 1,550 kilo tons by 2023, growing at a CAGR of more than 8 per cent from 2016 to 2023. It is also commonly known as elastane. Asia Pacific, especially China spandex market size was the dominant region and accounted for more than 60 per cent of the total volume in 2015. China accounted for a major chunk of the market in Asia Pacific region in 2015.

Dry spinning technology was majorly preferred among manufacturers over the past few years. Other process includes wet spinning, melt extrusion and reaction spinning. 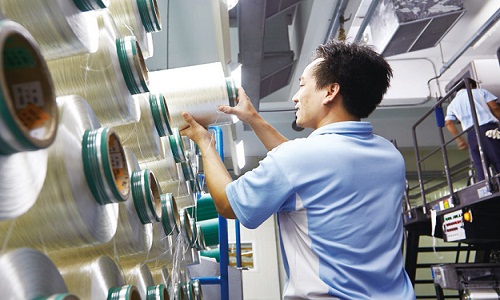 Application scope in apparel and textile industry is likely to drive spandex market over the forecast period. They are used in textile manufacturing applications such as leggings, gloves, cycling jerseys and competitive swimwear. Spandex market price has been weak in mid 2014 owing to tight supply and low demand from downstream applications. The market is expected to grow with recovery in US economy post recession.

In active sports, strenuous movements are involved that may require garment stretch. This stretch can result in movement restriction for the wearer. This can be overcome by using spandex material. Factors such as superior elasticity, regaining to original shape, durability, lightweight, resistance to UV light is likely to favor spandex market demand.

Automobile production increase, particularly in Asia Pacific is likely to drive market growth. Major automobile manufacturers are shifting bases to countries such as Indonesia, Thailand, India and China owing to cheap labor wages and favorable government incentive schemes. It is preferred for manufacturing door panel fabrics required to stretch and adhere to floor. Global automobile sales were estimated at 75 million units in 2011 and are likely to cross 90 million units by 2017.

Over the forecast period, sportswear application is likely to witness highest gains. Technology advancement with moisture management properties coupled with performance efficiency is likely to benefit elastane market growth. Up to 3 per cent of spandex fiber in fabric is enough for fabric improvement & shape retention whereas high performance garments such as swimwear is may contain 30 per cent. Global sportswear market size was estimated at over $260 billion in 2013 and is likely to grow at a CAGR of over 7 per cent up to 2023. Sportswear accounted for over 15 per cent of the clothing industry.

Derived from petrochemical feedstock, Polytetramethylene ether glycol (PTEG) and MDI are raw materials required for spandex production. PTEG accounted for more than 70 per cent in 2012 for spandex manufacturing application. It is widely used in Asia Pacific as the region is major manufacturer.

Meanwhile, Invista, under the brand name Lycra, has recently introduced bio based spandex for apparel and garment applications. Bio spandex contains approximately 70 per cent of the sustainable feedstock made out of renewable butanediol from dextrose which is derived from corn. The company markets the product as a specialty product and sells at a premium rate than conventional Lycra.

Invista uses bio-based 1,4-butanediol as raw material from Genometica’s developed technology which has successfully developed fermentation route for the chemical using E. coli to metabolize sugar.1,4-butanediol is then synthesized to THF which is further used for PTEF production.

Asia Pacific market was the dominant and is likely to witness highest gains over the forecast period. China accounted for more than 50 per cent of the global share in 2014 and is the major manufacturer for this market. In 2012, China had around 30 manufacturing units with a total capacity of 520 kilo tons and domestic production exceeding 320 kilo tons in the same year. 40D and 20D are major products manufactured in China.